Who We Are Security, flexibility and quality of life

Trans World Assurance Company was founded in 1963 by a decorated WWII Marine, Charles Woodbury. As a combat aviator, Mr. Woodbury was instilled with a sense of purpose, commitment and all the values and traditions that make our military and country the strongest in the world. After retiring from the military, Mr. Woodbury returned to Pensacola, Florida and began working with local families (military and non-military) to help them increase their quality of life, as well as their level of security, by offering them unique and stable financial products designed specifically for their needs. He worked with thousands of people who all had a similar problem...a lack of retirement and insurance planning. Mr. Woodbury also realized that most companies providing programs to the men and women of the US Armed Forces were out of touch with their unique needs. Charles Woodbury believed he could provide a better program for our U.S. military and civilians worldwide by forming his own company -- Trans World Assurance Company.

TWA was founded on tradition and built to provide a solid future for its customers. Since its inception, TWA has been dedicated to providing only the safest and strongest cash accumulation life insurance products available. With a simple and systematic approach to investing in United States Government bonds and highly rated corporate bonds, and great service, TWA has grown into one of the strongest and most stable insurance companies in America. Since its inception, TWA has remained strong and solid, even during times of uncertainty. TWA continues to stay true to the vision of Mr. Woodbury, by continuously providing protection, cash accumulation, and a secure retirement for its customers, military and civilian alike.

TWA is also proud to be a reinsurer of our U.S. military's Servicemembers Group Life Insurance (SGLI) program that protects all military members throughout the world. We strongly encourage participation in SGLI, and we feel that our flexible universal and whole life insurance plans and their extraordinary record of building cash are an excellent supplement to government or other programs you might have.

As was the goal of our founder, we remain committed to the highest standards of business, and to products that incorporate sound planning, flexibility, "tax-deferred" capital/cash accumulation, and life benefits for our customers. TWA is licensed in 47 states and worldwide, and our track record speaks for itself.

Charles P WoodburyCharles Putnam Woodbury was a man of vision. His forward thinking and blue collar work ethic helped him become one of northwest Florida’s most successful businessmen. He was also a man who loved his country as well as the military members who fought to protect it. He was a family man and a community leader who gave back generously. Few people in American history have been as devoted to their country and community as Charles P. Woodbury.

He was born in 1919 in Kansas City, MO. When he was only nineteen, Charles learned an early lesson about the value of life insurance when his father passed away prematurely. At the time of his father’s death, Charles was away at school in Arizona and was forced to move home to take care of his mother and four sisters.

Soon after World War II started, Mr. Woodbury decided to join the Navy as an aviation cadet. He later served in the Marines as a combat fighter pilot. When he left active duty, he remained in the military as a reservist until he retired as a Major after twenty years of service. During his time of service he was awarded the Distinguished Flying Cross, Air Medal with Gold Stars, Purple Heart, Presidential Unit Citation with Bar and the Bronze Star, accompanied by various other theatre and campaign medals. 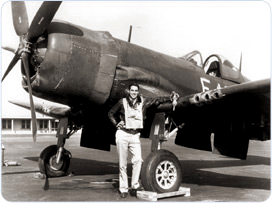 In 1946, he married Eleanor Gunn (also a Marine) and decided to settle in Pensacola, Florida, the home of Naval Aviation. He quickly became a leader in northwest Florida in both the insurance and banking fields, with a special interest in serving the needs of the military community. His insurance companies were among the founders of the Servicemembers Group Life Insurance (SGLI) and continue to serve as part of the underwriting group today.

He was a natural leader who was gifted at promoting citizenship and leadership for the young in his community and further enjoyed creating jobs for his community. Despite his many business ventures, he was also a volunteer fire fighter. He chartered the first Boy Scout troop ever in Warrington, Florida and later became chairman of the Gulf Coast Council. In 1960, his contributions to the community through business and civic affairs earned him the prestigious award of Florida’s first Northwest Business Man of the Year.

Charles Putnam Woodbury was a Marine, a pilot, a businessman, a community leader, a father, a husband and a Patriot and he excelled at each. Over the course of his lifetime, Mr. Woodbury positively affected the lives of thousands of people; and to this day, his companies and family continue to move forward with his selfless approach to helping our military get a little closer to realizing their dreams.

See how in 2021 Trans World Assurance compared to 25 of the leading life insurance companies.

Now, both Flexible Dollar Builder and also Future First Universal Life policyholders can login to their accounts to view their policy information.

We have long recognized the important role life insurance plays within a family. We believe insurance should not just pay if you die. We believe it should also pay living benefits.

TWA provides permanent solutions to augment any existing government insurance/retirement programs you may have. We believe your coverage should also provide living benefits.